Macau continues its fight against smoking in casinos 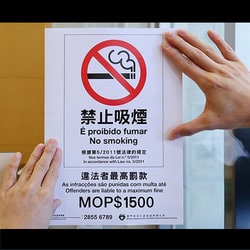 Since last year, Macau has shown how determined it is to ban smoking in its casinos. In a report published on the 8th of November, the Macau Health Bureau / MHB  has made public what is going on in this area by the Bureau of inspection and coordination of games of chance and regulatory authorities. Between January and October 2019, inspections in Macau’s casinos have increased.

Origins of the laws

In 2017, Macau voted to ban cigarettes in public places. This affects Macau’s casinos in particular, where there has always been a very high number of smokers. In order to reduce the impact of this decision, the law recommends that casinos install smoking rooms some distance away from the public playing areas which are now non-smoking.

Since January 2019, when the law came into effect, a phase of repression began. Anyone caught breaking the law against smoking in casinos and other public areas in Macau faces a fine of almost €150.

In order to ensure that the law is strictly observed, spot checks are regularly carried out in Macau’s land based casinos. Between January and October 2019, the Bureau of inspection and coordination of games of chance and regulatory authorities has visited casinos 1058 times to check on the application of the new law. This number of visits over 10 months is an increase of 45.9% compared to the same period last year.

The inspections carried out in the casinos haven’t been in vain. In total, 1183 people were caught breaking the law, which is a decrease of 17.3% compared to the number of people stopped over the same period last year.

Overall, a drop of 25.9% has been registered since the beginning of the operation. According to the Macau Health Bureau, the MGM Hotel-Casino operated by MGM Resorts International registered the highest number of  smoking infractions in casinos. The casino was labeled a “black spot” for infractions just like the Grand Lisbon Casino was last June.

The MHB has carried out 258 456 in all areas of business in Macau over the first ten months of the 2019. In total, 4 168 cases of being caught in the act are to be pursued in accordance with the new laws in vigour.