Skip to content
Home/Online casino/Publicity for 32Red : Wayne Rooney in trouble with the Anglican Church

Publicity for 32Red : Wayne Rooney in trouble with the Anglican Church 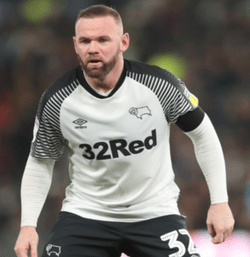 Wayne Rooney, one of the legends of English football, was recently denounced by the United Kingdom’s Anglican Church because of an advertisement for 32Red, the online casino operator and  sponsor of his new club, Derby County FC. In the video, the footballer informs players of the risks of addiction to cash games but it appears that it wasn’t seen in this way by the religious leaders.

A video against addiction to gambling

A few months ago, the online casino 32Red was much criticised following the signing of a sponsorship contract with Derby County FC. The union of the two groups was shown by a 32  which figured on the jersey of the English second division club’s emblematic player, Wayne Rooney.

For the past few days, the new club signing has been at the centre of the controversy surrounding this £8 million business deal. The cause of this is a video of about 6 minutes in which the footballer talks of the dangers of an addiction to gambling. The only problem: the English forward is wearing one of the club’s jerseys bearing the famous 32.

This caused a backlash and created a polemic around the particular links between bookmakers and sports clubs in the United Kingdom.

However, in the video, Wayne Rooney deals with a very important and sensitive subject. He advises  against ever gambling when one is bored, tired or stressed. To avoid getting into debt, he advises gamblers to set themselves limits. Although it seems that the message was interpreted differently. Quite quickly, the bishop of the Anglican Church in St. Albans, the Reverend Alan Smith, denounced what he considered to be a publicity video for the 32Red casino. The spokesman for the  highly respected church also mentioned what he considered to be “simplistic” solutions put forward in the video.

In his opinion these suggestions couldn’t really change anything for gamers, who have already suffered the negative effects of a gambling addiction. He launched into a real tirade against cash games and their devastating effects on members of his community. The bishop concluded by saying that he considered the video in question to be an admission of guilt from gaming operators who are conscious of the ravages that they can engender.

The question of advertisements for cash games in the sporting sector has been the subject of debate among the British public for some years. For many, business contracts between online bookmakers and football clubs in particular, have been responsible for an increase in the number of minors who play online games. Despite campaigns to put an end to it, there doesn’t seem to be any lessening. This season, 27 out of the 44 best first and second division English clubs are sponsored by an online bookmaker.