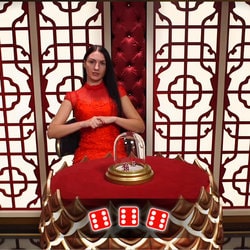 Evolution Gaming is on to a good thing with its winnings multiplier. After the success of Lightning Roulette, Evolution Gaming is using the same principle in other games. This is true for the dice game,  Live Super Sic Bo which came out in April 2019. Sic Bo is a very popular game in Asia. Evolution Gaming offers live Sic Bo games from one of its studios, hosted by a charming female dealer. We are seeing more and more games from Evolution Gaming that link live gaming with random number generators as happens in this new game.

The Live Super Sic Bo game consists of 3 die under a dome. The aim is to predict the outcome of the roll of the die from 50 different types of bet. The game takes place in a studio and is hosted by a female dealer, who is seated. RNG software gives the multipliers on the sic bo combinations. As we mentioned previously, the success of the Lightning Roulette game has encouraged Evolution gaming to apply it to other live games such as Live Super Sic Bo. The multipliers go as far as 1000 which means that players could win up to 1000 times their wager. The concept behind a half-live half-RNG game is that large sums can be won. However, the bets must be placed on the combinations on which the software has put the winnings multipliers.

The studio is nicely decorated mostly in red as are the table and the female dealer’s dress. The die are shaken automatically as is the case at other live sic bo tables. We note here that the dealer is more like a host than a dealer in the proper sense of the word.

The Live Super Sic Bo table appears in Evolution Gaming’s lobby in the “Baccarat and Sic Bo” menu. The number of baccarat tables has significantly increased and Evolution Gaming has added its one Sic Bo table to this section. The leading live games developer in the market has taken this opportunity to update its menu with different categories such as Best Games, Roulette, Blackjack, Baccarat &Sic Bo, Poker and Televised Games (Deal or No Deal, Monopoly Live, Dream Catcher, Lightning Roulette and Football Studio).

You can find this dice game in leading online casinos such as Fatboss, Dublinbet and Lucky31. If you wish to play using cryptomoney, the online bitcoin casino, mBitcasino will suit you because it has this game.