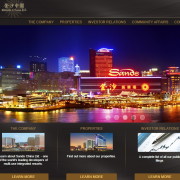 For many Sheldon Adelson’s name is forever linked to his Las Vegas Sands company and now he is to take over at the top of the Las Vegas Sands Asian based subsidiary Sands China. The move comes as the current president and Chief Executive Officer Edward Tracy is due to retire from both positions. Adelson founded his company in 1988 and is its president and Chief Executive Officer. He will become the president of Sands China from the 6th of March this year and it is thought that Robert Goldstein who already works for Las Vegas Sands will become the new acting president of Sands China. For some this move is looked on as an attempt by Sheldon Adelson to bring his company’s Asian operations more under the control of the parent company.

Sheldon Adelson took a gamble on setting up operations in Macau before the other major Las Vegas and international casino operators did so. He gained a local gambling licence soon after Macau opened up its gambling market in 2002. Only six of these licences have been issued and as these are soon to be up for renewal it is believed that Sheldon Adelson has another reason to regain full control over his casino interests in Macau. Sands China has four luxury casino resorts in Macau, these are: The Venetian Macau, The Plaza Macau, Sands Macau and the last casino complex opened by the company in 2012, Sands Cotai Central. Adelson is also due to open the Parisian Macau a French themed casino resort on the Cotai Strip. Work on the luxurious Parisian Macau is well under way and the casino resort which will add around 3000 extra hotel rooms to the Cotai Strip is due to open towards the end of this year. The new integrated casino resort will have an extremely large gaming area and the complex is believed to have cost 2.7 billion dollars.

Sands China back under the wing of Las Vegas Sands

While it has often been said that Sands China was “managed” long distance by Sheldon Adelson, it will now be true when he takes over from Edward Tracy who will however stay on as a consultant with Sands China. The company has had several Chief Executive Officers since it broke away from Las Vegas Sands but there have been problems with some of these. There is ongoing litigation with one ex-Chief Executive Officer and another only lasted a short time at the helm. Edward Tracy is said to have turned Sands China around with his plan to encourage mass market gamblers alongside VIP players and he is also said to have made the casino resorts’ entertainment more attractive to Asian players and tourists. Given the current situation in Macau’s gambling industry it showed great foresight to develop mass market gambling when Sands China did.