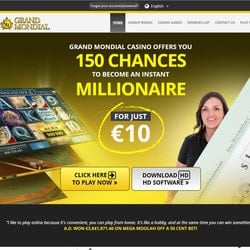 Microgaming’s leading progressive jackpot, Mega Moolah has been won! The happy winner received a cheque for €18,910,668 in Grand Mondial Casino, one of 29 online casinos belonging to the Casino Rewards group. This win has beaten all records, the previous record was held by Jon Haywood, who won more than 17 million euros in October 2015. Once again an online player has won a progressive jackpot on his mobile.

Live Dealers Casino brings you more on this new record that has never before been reached on a Microgaming slot machine.

The Mega Moolah progressive jackpot was won on the 28th of September last in the Casino Reward group’s online casino Grand Mondial Casino. The happy winner, who has chosen to remain annonymous received a cheque for €18,910, 668. All we know is that this player was playing on his mobile when the winning combination appeared on his smartphone. Since the launch of the offer- 150 chances of becoming an instant millionaire for only €10-, players have visited the Grand Mondial Casino en masse to try their luck.

Microgaming’s progressive jackpots or the creator of online millionaires

Microgaming’s slot machines have made and still make online players happy. Many online players have won big playing Mega Moolah, a progressive jackpot that contributes greatly to Microgaming’s reknown. Last year a person won more than 7.7 million euros playing in Belgium on the legal online casino Unibet. Since launching the Mega Moolah slot machine, Microgaming can claim to be a creator of online millionaires.

This jackpot’s pot and that of all progressive jackpots depends on the bets placed and the amount of players on the slot machine so the more players bet the more the pot increases over seconds. This is also due to the fact that Microgaming is one of the best progressive slot machine developers and is very popular with online players. This is easy to believe. It makes one dream when one sees the amount of the pots and to think that with just a few dollars a player could end up with an eight figure bank balance.

Grand Mondial Casino is one of Canada’s most popular online casinos and its offer of 150 chances of becoming an instant millionaire for just €10 is a big hit with players. If you’re a slot machine fan, definitely try Mega Moolah!