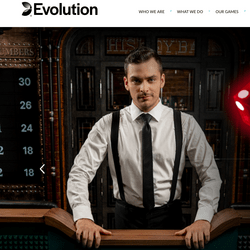 Evolution Gaming, the market leader for live casino games, has officially rebranded to Evolution. This company leads in almost every market when it comes to live table and card games like blackjack and roulette.

It’s also an innovator, having brought TV game shows like Maga Ball, Monopoly Live, Deal or No Deal and Crazy Time to live casinos across the web.

Why the Rebrand From Evolution Gaming to Evolution?

While it’s the number one company for live casino games in legal and regulated markets, live casino games are not the only thing Evolution does. It also is involved in bespoke studio design, software development, and innovation in the wider tech sector. The rebrand to Evolution is supposed to reflect this wider scope of business while not branding the company strictly as a gaming firm.

This online software has wasted no time with the rebrand. It announced the change would take effect immediately in early October. As of now, all icons on the website, logos in the game studios, and corporate communications use the Evolution brand name. Evolution has stuck with its signature black and white brand colours with a sharp new logo design.

Evolution will remain the market leader for live casino games. It is aggressively expanding with multiple partnerships in new legal US markets. With its wide range of top-quality live casino games it is sure to remain a force in live gaming.

This live software offers live games across a broad spectrum. These include traditional table and card games like blackjack, roulette, and baccarat as well as TV game shows like Deal or No Deal. In 2020, it released its wildest game yet – Crazy Time – demonstrating just how far ahead of the competition it is with a live game featuring multiple exciting bonus rounds.

Why is Evolution so dominant in live casino gaming?

It’s attention to detail is certainly one factor. When you try Evolution games, you’ll notice that everything has been designed to enhance your experience. Beautiful live dealers are immaculately dressed, roulette wheels and blackjack tables are of the highest quality, HD cameras stream seamless footage from multiple angles, and Evolution games often have extra features to make betting easier and games more understandable.

Evolution also has multiple live games with large multipliers. For example, in Lightning Roulette, players can win multipliers of up to 500x on lucky numbers. These extras are why Evolution is such a dominant force in live casino gaming.

Earlier this year, it also announced its intention to purchase its rival NetEnt. Not only does this eliminate a rival in the live gaming sector, but it also adds a vast library of high-quality video slots to Evolution’s arsenal.

With the rebrand complete, Evolution will no doubt continue to go from strength to strength.