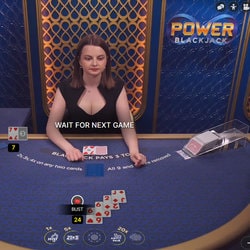 Evolution Gaming has added another game to its Infinite series of live dealer games with the launch of Power Blackjack.

This new blackjack game is one of the 12 games showcased by Evolution Gaming at ICE 2020 as part of its 2020 development roadmap.

Following the success of Infinite Blackjack, Evolution decided to develop further games in this series with the ability to host unlimited players.

However, unlike other blackjack titles in the series, this game will have the exciting feature of allowing players to double, triple, or quadruple bets after the first two cards are dealt.

Nothing can replace playing the game for yourself, but here’s a summary of a few of the key features.

As a game in the Infinite series, the first two cards will be dealt for all players to use. However, after this, each player decides whether to stand, hit, split, double down, or play the hand however they wish. This feature is what allows Evolution Gaming to offer unlimited seats in these games, meaning you’ll never have to wait to play.

Evolution Pressing Ahead in US Markets

Last month, Evolution reported that it had entered into an agreement with Golden Nugget, a hugely successful US casino operator, to offer its ever-growing range of live games to players in New Jersey and potentially further afield as US online gambling laws liberalize state-by-state.

Under the terms of the agreement, Golden Nugget’s players will have access to Evolution’s suite of live dealer games, which will be streamed both from the Golden Nugget live studio and from Evolution’s own live studio in Atlantic City. Golden Nugget already offers live games powered by Ezugi, which Evolution Gaming acquired in 2018, further consolidating its power within the live gaming sector.

With the addition of the 12 new games promoted at ICE 2020, including Power Blackjack, Evolution Gaming’s future continues to look bright. Players from the UK and Europe can try Power Blackjack and other Evolution live games at Mr Green online casino. It’s one of our top-rated live casinos.