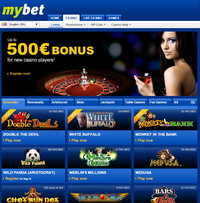 Mybet Holding SE, the German based casino and betting company recently released its financial statement for the first quarter of 2015. There was a slight overall increase in the company’s income for the first few months of this year but some sectors of Mybet reported a decrease in revenue compared to that of the same period in 2014. Mybet has been able to explain these decreases due to changes within the structure of the company and to large winnings pay outs to clients.

Increases and decreases in revenue

Mybet’s total income for the first quarter of this year is 18.3 million euros which is a rise of 2.3 per cent. The Mybet casino and poker sectors increased from 5.5 million euros for the first quarter of last year to 5.7 million for the first quarter of 2015. This is an increase of 3.2 per cent. Online sports betting was a growth area for Mybet with revenue rising by 14 per cent over the past few months. The company has stated that it would expect this trend to continue in 2015. Compared to this, Mybet’s largest sector, sports betting was one area that posted a drop in revenue of just over 2 per cent when compared to revenue for the same time frame in 2014. Mybet’s Chief Executive Officer stated that this slight drop was due to a large number of high level winnings pay outs. The sports betting sector of Mybet actually saw a rise in wager amounts but this was offset by the major pay outs.

Mybet ‘s total income for last year was reported to be just over 70 million euros which was up by 5 per cent compared to the previous year. The company hopes to generate revenue of 75 million euros this year. Mybet upgraded its sports betting sector last year and this year has plans to continue to upgrade its structure. The company plans to focus on its core sectors this year and to further develop its online offering. Mybet is to collaborate with Amelco UK, a software developer to upgrade its products and its operating system. The company has said that this investment in new technology will be expensive but there should be an increase in revenue next year after the improvements are in place.

Mybet Casino was launched online in 2002. Mybet casino’s games are in three sections: the Casino has traditional games such as baccarat, roulette and blackjack as well as slot machines and arcade type games. The Games section features about a 100 games mostly from Netent and also slot machines. In the Live Casino players can join blackjack and roulette tables hosted by live dealers and streamed from a studio within a land based casino.
By admin|2015-06-05T11:59:58+00:00June 5th, 2015|Mybet, Mybet Casino|0 Comments