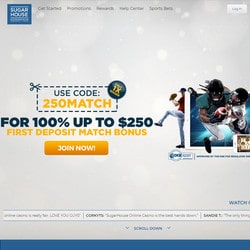 A few months into its conquest of the North American market, Evolution Gaming has taken a major step forward by signing a partnership with the online casino PlaySugarHouse to supply live dealer tables to its live casino section. A  collaboration agreement that follows the one signed a few weeks ago with the Hard Rock Hotel Casino Atlantic City. The developer from Riga has definitely arrived in the land of Uncle Sam!

Since its creation, Evolution Gaming has managed to enter new or barely exploited markets to bring them new energy. This is the case once again in New Jersey, where the Riga based developer has set up to launch its very first live dealer section in a popular online casino, PlayHouseSugar.com, a site operated by Rush Street Interactive and which already has thousands of players in New Jersey. From now on, along with slot machines and other RNG tables, players will benefit from a more realistic experience by playing with real live dealers. The games will take place  in real time and will be streamed live from Evolution Gaming’s new studio in Atlantic City.

For the moment, PlaySugarHouse.com‘s live section will have ten Evolution Gaming live dealer tables. Among these are Roulette, Blackjack, Baccarat and also two live dealer Poker tables : Three Card Poker and Ultimate Texas Hold’em Poker. These last two tables are a major innovation because there are none of this type yet in the United States. We wish to mention that Evolution Gaming offers the most fluid interfaces and the most rapid live dealer games in the worldwide iGaming industry. This will please New Jersey online players who will have a complete gaming experience very close to that available in real casinos.

Present in the iGaming industry since 2006, Evolution Gaming immediately specialised in developing live dealer gaming tables.  A developing area at the time but one that the Riga developer built up with its innovations. Now, present in many European online sites, it operates from ten studios based in different parts of the world and which contain over 400 tables hosted by real professional dealers.

In the American market, that it has set out to conquer, the developer is setting up an ultra modern studio in Atlantic City with the plan to make it a hub for its US operations. Its partnership with the operator, Rush Street Interactive will help with this. Owner of the site PlaySugarHouse.com, the company is one of the most active groups in the American cash games industry in recent years. Rush Street Gaming, its parent company, owns four real casinos in the country and is expanding to become a leader in the sector.