Are the Casinos in Singapore Productive Enough? 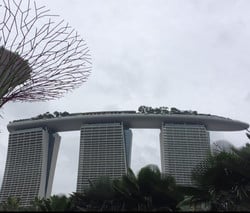 Recently, Singapore released the figures from its tourism receipts. The release didn’t bring the great news that some had expected. Even though tourism is on the rise, the influx doesn’t look to be translating into gaming revenue.

Are Expectations Being Met?

In Singapore, there are two “integrated resorts”. These are properties that have a casino, shopping mall, hotel and various entertainments. They are Marina Bay Sands and Resorts World Sentosa. When the properties were constructed, the hope was that they would be a considerable draw and would be reported in the “sightseeing, gaming and entertainment” category of the domestic gross product. This was the stated aim of the government in 2010 when they allowed the projects to proceed. The difficulty lays in the fact that there does not seem to be a correlation from the overall number of tourists and the gross gaming revenue of the casinos.

What the Numbers Show

In February, the Singapore Tourism Board released its figures for the 2016. In these records the international visitors to the city-state reached a record high of 16.4 million.  This equates to a 7.7% growth over the previous year and was almost 5% above even the most generous predictions made by the Tourism Board. Overall tourism receipts showed a rise of 13.9% as these visitors spent more on hotels, food and drink and shopping. In contrast, the receipts from the “sightseeing, gaming and entertainment” sector dropped by 16% overall for the year. The Tourism Board did not offer a breakdown of the individual aspects of the category, but it was stated that the year after year decline of this number is due to “lower gaming revenue reported by integrated resorts”.

Where the People Are

Overall, there has been a decline in tourists visiting Singapore since a record high in 2013 of 15.6 million. 2014 saw 15.1 million visitors and there were 15.2 in 2015. In 2016 there was a new record high of 16.4 million tourists. In the world of casinos in Asia, the target demographic has been people who live on mainland China. It is long thought this population has an affinity for gambling. Singapore has seen its share of visitors from China for many reasons. A strong ethnic population as well as its history for banking and trading have keep the popularity high. It should be noted that visits from this group weakened when the Chinese government initiated its anti-grafting laws. While this is possibly coincidence, it is notable. When this trend became noticeable, a targeted marketing campaign in high profile positions along and a stabilization of the Chinese economy has helped to mitigate this situation. This resulted in another record for 2016. There was a record number of visitors from mainland China that composes a 36% increase which brought this population to the second highest overall. The jump in growth out did every other population to visit the city-state. The fluctuations in visitors is clearly not being adequately reflected in the casino gross gaming revenue.