Celine Dion in Caesars Palace Las Vegas – it’s all over! 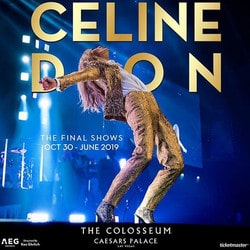 After more than 15 years appearing almost every night on stage in the Colosseum in Caesars Palace, Celine Dion has announced that she will soon end her residency in Las Vegas. On the 8th of June 2019, the Canadian singer will give her last show before leaving for other ventures. The end of an era…

Even though it is above all “Sin City” and the “Casino Capital”, Las Vegas has been associated for almost two decades with the name of one of the world’s biggest music stars. Since March 2003, Celine Dion has been appearing 5 days per week in one of the city’s leading casinos: Caesars Palace. The atypical love affair between the singer and the casino started some months earlier in 2002. After she had just had her son, Rene-Charles, Celine put the residency proposal to the complex management so that she was able to be near her son and also appear on stage. Very taken with the idea, the group managing the complex had a new theatre built just for the singer: the Colosseum. On the 25 of March 2003, Celine Dion appeared there for the first time in a show called “A New Day” which also included dancers and acrobats from the Cirque du Soleil. Over the next five years, she appeared on the same stage 5 evenings a week.

The Canadian singer then took a break for several months before returning in 2011 with her new show, “Celine”. In spite of the reduced frequency, the singer’s concerts in the Colosseum are still very successful. In October 2016, some months after her husband’s death, Celine Dion celebrated her 1000th show in the city. More than 2 million spectators have already seen these shows.

At the beginning of the week, Celine Dion broke the news to the whole world on her Instagram account. In an emotional message, she recalled the special relationship she had with the Colosseum and the important role it played in her career. Thanking her fans, she also announced the online launch of pre-sales for the series of final concerts in Caesars Palace which will take place between the 26th February and the 8th June 2019, the date of the grand finale. For these final shows, the singer is promising a completely unique show that her fans will remember. She also announced that she’s preparing a new album and wants to move to another city. The legend of Celine Dion will continue….

Other stars resident in Las Vegas

Celine Dion isn’t the only singer to have a faithful following in Las Vegas. Following the construction of the Colosseum, the Caesars Palace management repeated the residency concept with  Elton John, whose show “The Million Dollar Piano” was a great success. The singer Britney Spears finished her contract with the complex at the end of 2017 after 4 years and more than $130 million in sales with her show “Piece of me”. However, Celine Dion is still the one who had the highest amount of sales with with a cumulative total of $233 million.