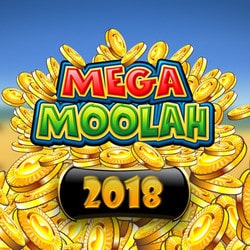 Mega Moolah is the largest online casino progressive jackpot. It’s almost equivalent to the Partouche casinos’ Megapot but in an online version. It could even have the same slogan “ the jackpot that makes millionaires”. At the moment of writing, the jackpot is 1,478,149 dollars. A nice amount to make one’s dreams come true but first one needs to come up with the winning combination on this progressive slot machine from Microgaming. This software has just published the official figures for the Mega Moolah progressive jackpot in 2018. It paid out €154,954,249 to winners in 2018 and several winners became millionaires!

Live Dealers Casino brings you all on the winnings paid to players by the Mega Moolah progressive jackpot in 2018, the developer Microgaming’s cash cow.

Microgaming has published a statement on the winnings paid out in 2018 by Mega Moolah. The figures are amazing. In 2018, players won €154,954,249 on Microgaming’s progressive slot machine Mega Moolah. It’s the highest paying progressive jackpot ever. Last year, nine players became millionaires and just among them, they won no less than 40 million euros! On the 28th of September 2018, on the mobile version of the online casino Grand Mondial, a player won € 18,915,872. Going back to the 14th of January 2018, the first Mega Moolah winner received a cheque for € 2,424,117 in Zodiac Casino.

This list of winners is only a small sample of the winners. This progressive jackpot is often won. It just depends on having a lucky chance. It must be mentioned that hundreds of Microgaming casinos offer this progressive slot, which explains how the pool grows so quickly.

2019 could be a good year for Mega Moolah. In January 2019, a player won € 1,162,021 on Major millions in the online casino 32 Red, another jackpot from Microgaming. At the moment, the jackpot is 18 million euros. This pool will continue growing. The best 2019 online casinos all have games from Microgaming, which is very popular among online slot machine fans. Developers like Netent, Betsoft , Play’n Go and others have certainly risen to be among the best providers of online slots principally thanks to their 3D graphics but they don’t have progressive jackpots on a par with Mega Moolah. Like the Mega Fortune Dreams progressive jackpot from Netent, Mega Moolah can sleep easily without any direct competition.

At the time of finishing this paper, the Mega Moolah jackpot pool is 1, 482, 357 dollars. In just a few minutes it increased by $4,208. We have warned you that this slot machine is amazing! Don’t waste any time, play on this online slot machine, the jackpot is just a clic away !