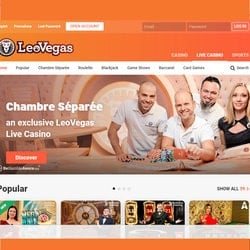 LeoVegas has become the latest online casino operator to launch its own proprietary live games platform. This brand will be launched on the domain LiveCasino.com and will operate under a Malta gaming license. This will be LeoVegas’ second live casino brand; the other is GoGo.com, which serves the Swedish market.

This will be one of the most comprehensive live dealer casinos on the web. It will offer games from Evolution Gaming, NetEnt, Pragmatic Play, Microgaming, and several others.

LeoVegas has big plans in the online gaming space

LiveCasino.com will operate on LeoVegas’ own in-house software, giving it full control over various important aspects such as player management and engagement, marketing, and the all-important payment methods on a region-by-region basis. This is an ambitious step which signals LeoVegas’ plans to expand and dominate within the live dealer games niche.

LeoVegas CEO Gustaf Hagman confirmed that while this brand was initially being launched in several English-speaking countries, the company has plans to expand into other markets. He also confirmed that the company had an “…ambition to take a position as a global leader in online casino…”

Given how rapidly live casino gaming is growing, this seems like a smart play and a logical place to start in the company’s quest for expansion.

Live dealer games on the rise

According to data from H2 Gaming Capital, live dealer gaming was worth approximately $1.2 billion annually as of the last quarter in 2019. With the current global shutdown of casinos and the reluctance of many players to return to them anytime soon, it’s highly likely that this revenue has grown significantly since then.

In any case, live casino games have an incredibly bright future, and an operator on the level of LeoVegas competing in the space can only serve to raise standards across the board.

No UKGC license yet

Notably, LiveCasino.com has not obtained a UKGC license. This comes after LeoVegas withdrew one of its other brands, Royal Panda, from the UK earlier this year. All eyes will be on whether or not LeoVegas plans to expand this particular brand into the UK market. If the end goal is domination of casino gaming, the UK would be a large and important market to overlook.