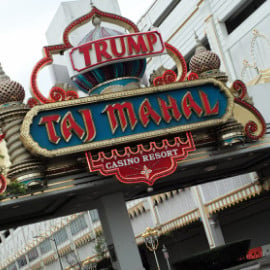 When you think of the skyline in Atlantic City, most people envision the larger than life casinos that once brought hordes of gamblers to the city. Though this may not be completely the case anymore, there are still some very iconic buildings hoping to change to meet the new demands of the tourist market. There are some very visible changes happening around town that should be noticed.

Perhaps the most notable change is the seeming removal of Donald Trump’s name from the once iconic Taj Mahal Casino. Early in February 2017 a local newspaper, the Press of Atlantic City, reported that workers had been seen removing Trump’s name from some of the signs on the building. The entrance from the boardwalk was the first to get this treatment. The front entrance and hotel tower signs had yet to be touched, but certainly will follow suit. This cannot come as a surprise as President Trump is not quiet in his dislike of failure. Failure is exactly what the Taj Mahal was serving and has been closed since October 2016, not that long after the property was sold to Carl Ichan.

Details of the Deal

When Carl Ichan purchased the Taj Mahal from Donald Trump it was with the idea in mind that he would update it into something profitable. This came with the caveat that the only way the Trump name and brand could remain with the buildings, was if they were maintained to the exacting standards that the brand is known for. This is nothing new as there have been lawsuits brought against Trump Entertainment Resorts in 2014 to remove the name from the Taj Mahal and Trump Plaza.

The other notable name change in Atlantic City is TEN, previously known as Revel Casino. This property was scheduled to open in the middle of February, but this date came and went with no grand opening. Owner Glenn Straub has voiced his frustration openly in the media stating that there are “more bureaucratic divisions in this state than we have ever experienced in opening in five other sites.” The main issue facing Mr. Straub is that New Jersey gaming regulators have found that he must obtain a state gaming license regardless of the fact he has engaged a third party to handle gaming operations. There is also the fact that the property hasn’t obtained the needed mercantile license or health inspections. It seems that both parties are at an impasse and when the property might open for business is up in the air. The outspoken Straub summed it up by telling KYW news radio that the doors to TEN will only be able to open when “the state gets off their ass.” Clearly, the winds of change are blowing in Atlantic City but what will it bring? One can only wait and see what these renovated properties will have to offer the city, and the many tourists that flock to its shores.