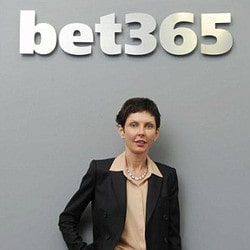 In twelfth place on the last Forbes list, Denise Coates is a model of success and her rise can be summed up in a few words: audacity, altruism, anticipation and regularity. Founder and main shareholder of the Bet365 group, the discreet billionaire from the small town of Stoke-on-Trent has succeeded in building, in a little under 20 years, a real financial empire in a particularly complex sector where female managers are still rare.

Live Dealers Casino reveals Denise Coates’ professional career and how she has succeeded in making Bet365 into a worldwide empire.

Born in 1967 in Stoke-on-Trent, a small town in the English Midlands, Denise Coates is the eldest of Peter Coates’ four children. President of Stoke City football club and well known in the town, the penniless ex miner’s son also rose in the ranks going from being an office boy to owner of a food restauration and services to football clubs company. A great football fan, from 1974 onwards, he bought sports betting shops that were popular at the time in Great Britain. Over the next twenty years he increased his network to fifty shops. Operating mainly in the Midlands, Provincial Racing was one of the bases of Peter Coates’ wealth and also where his daughter Denise learnt the trade.

When she graduated from Sheffield University with an economics degree at the beginning of the 90s, Denise Coated was made financial director of Provincial Racing. It only took a few months for her to show her potential and from 1995, she was Director General of the chain of betting offices. In this position, she enlarged the small empire by increasing acquisitions of rival betting shops.

From 2000 on, the economics specialist decided to concentrate on online games. A visionary and strategist, she was persuaded that the way forward for cash games was online and that this was where she should invest. To do this, she used the family company, Provincial Racing, as collateral and got an 18 millin pound loan from the Royal Bank of Scotland. With this money she launched Bet365 in 2001. In 2005, she sold Provincial Racing to the Coral Group for 40 million pounds and was ready to have her new company, concentrated online, take off. Leading the operation, Denise owns a little over 50% of Bet365, her father and one of her brothers own 43%.

The online adventure wasn’t all plain sailing and the company had to overcome many obstacles. But nothing stopped the mamager, who innovated constantly and made Bet365 a pioneer and a leader in the British online cash gaming industry. Under the leadership of Denise Coates, for example, the company was the first in the sector to develop its own internal software to offer online players a more ergonomic interface, really customised and also, above all completely secure. Bet365 was also the first full-service platform in the market allowing online players to bet of an array of sporting events taking place all over the world and at the same time access all their favourite online casino games : Poker, Blackjack, Roulette, Baccarat, Bingo, Keno etc.

Now Bet365 is 17 years old, has 4000 employees and 45 billion pounds of bets anually including 2.5 billion annual income. In 2017-18, its CEO received a salary of 200 million pounds sterling. Her personal fortune is estimated to be 4.6 billion dollars.