Atlantic City to increase its tourist attractions as casinos close 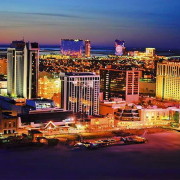 Last year was a black one for Atlantic City’s land based casinos. Of the city’s twelve casinos only eight are still in business and out of these eight at the beginning of this year three are in bankruptcy proceedings, these casinos in difficulty include the Trump Taj Mahal and the famous Ballys Casino. The four casinos that closed over the past year were the Atlantic Club, The Showboat, The Trump Plaza and Revel. The first signs of difficult times for Atlantic City’s casinos emerged in 2007 when casinos began to open in the neighbouring state of Pennsylvania. These new casinos attracted players who would have previously gone to Atlantic City casinos and so it was the beginning of the yearly decreases in casino revenues up to the present. Casinos have continued to open in neighbouring states and casino income has dropped drastically from just over 5 billion dollars in 2006 to 2.74 billion dollars in 2014. This decline has encouraged the Atlantic City authorities to try to diversify the city’s tourism base.

There have been plans to move away from almost total reliance on casinos to attract tourists to Atlantic City for about 25 years but it is only now with all the recent casino closures and about 8000 lost jobs that there is real movement to diversify. The Atlantic City council has given the go ahead for non gambling based tourist developments. The city’s Steel Pier is to be expanded and a Ferris wheel 205 feet tall is to be erected there. The wheel will cost around 14 million dollars and 8 million of this will be provided as a loan by the city’s Casino Reinvestment Development Authority.
The wheel is under construction in Italy and it will have 40 enclosed air conditioned cars. It will be one of the tallest wheels in the United States and along with a zip line ride should prove to be a major tourist attraction. It is hoped it will be in operation by December of this year. The area of the Northeast Inlet is to be redeveloped with new restaurants and entertainment and leisure amenities. There are also plans to rebuild the famous Atlantic City Boardwalk and to construct an elevated walkway to attract new business and tourists to the area.The city has to do something to stem the flow of job losses from the recent casino and hotel closures and moves to develop tourism based on leisure activities not involving gambling are hoped to be the way to develop the city for the future.
By admin|2015-03-09T07:19:59+00:00March 9th, 2015|Atlantic City casino, Casino|0 Comments