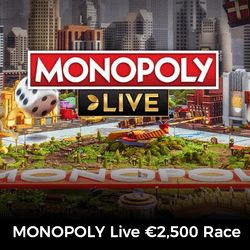 Monopoly is probably the most recognised board game in existence. There have been TV shows themed upon this iconic game, and countless numbers of video slots, too. However, unquestionably, one of the best spin-offs, has been Evolution Gaming’s award-winning Monopoly Live. Now, to add another level of excitement to this stellar game, Mr Green has introduced Monopoly Live Races with cash prizes up for grabs.

What is Monopoly Live?

There are two parts to the Monopoly Live game. The main game is a simple money wheel, which many people call a Wheel of Fortune. Players have the choice of six bets on the wheel. These are a mixture of four different win multipliers, and two bonus segments: 2 rolls in the bonus game and 4 rolls in the bonus game. If a player bets on the correct bonus segment and the money wheel stops on it, he is taken to the 3D augmented reality Monopoly board.

All of the classic London properties have win multipliers that ascend in value as they go around the board. Players start with either two or four rolls. If a double is thrown, the player gets an extra roll. As Mr Monopoly jogs around the board, he picks up the multipliers wherever he stops. Chance and Community Chest cards can boost the multipliers up to x10 for even bigger wins.

This current Mr Green promotion makes use of the two bonus segments on the money wheel. Players collect points which form a leaderboard, and the top 20 at the end of each day will win a share of the cash prize. The points are awarded as follows:

First place on the leaderboard walks away with 30% of the total cash prize, second picks up 20%, and so on, down to the 20th name on the board.

This promotion fits in with the recommended Monopoly Live strategy that all experienced players use. You have to place a bet on these bonus segments because it is the only way to enter the big money bonus round. Therefore, players do not have to play any differently from how they normally would. Furthermore, the minimum bet sizes are more than reasonable, so more players can join in the race for some free Mr Green cash.