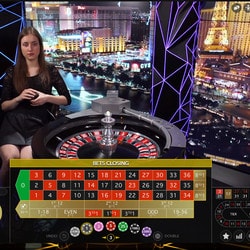 Imagine for just one minute that there’s a Roulette table on which two balls are thrown simultaneously per spin. Impossible, you say? At the risk of deceiving the purists and the most pessimistic, such a table isn’t only possible but it already exists. Just a few weeks ago, Evolution Gaming announced the launch of its Double Ball Roulette table .

A new creation from the Riga based developer, this atypical table is already available on certain platforms like MrXbet’s, where you can now chance your luck and discover the exceptional gaming experience that it offers.

Live Dealers Casino brings you everything about this live roulette table with two balls so that you can win even more.

Two balls on one table

One doesn’t have to look far to understand the main innovation in this Live Roulette table, Double Ball Roulette. As its name indicates, what is unusual is that at every spin two balls are thrown on the same wheel. To be more precise, the dealer who hosts the game presses a button each time that simultaneously launches two balls at the beginning of each game. After several spins, each ball stops on a number. So in each game there are two winning numbers. This means that at the beginning of each game, you need to place your bets taking this aspect into account. It also implies that you have more chances to win.

By simultaneously putting two balls on the same table, Evolution Gaming also multiplies your chances of winning at this atypical table. At each spin you have the natural probability of higher winnings and you also have the possibility of having exclusive bets which can make your winnings increase up to 1300 times your initial bet. This is a level of remuneration that isn’t offered by any other roulette table. Bets at this table start at  €0.2 although it’s possible to go up to €4000 if you’re not afraid to take risks that could bring you great rewards.

MrXbet is equipped with Evolution Gaming’s live tables so in its live section it offers the developer’s most innovative tables to very appreciative players. So, it goes without saying that Double Ball Roulette has become part of this selection since its official launch. Open 7/7 and 24/24 , this new table is available without a download on PC, tablet and mobiles. The image quality is excellent and the streaming very rapid.