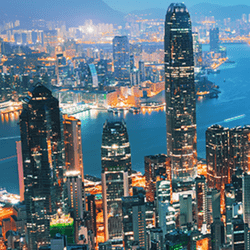 Hong Kong police have reportedly broken up an illegal gambling syndicate which had generated $17.2 million (HK$133m) in illicit funds over a 14-month period. Seventeen suspects – nine men and eight women aged between 22 and 58 – were arrested after a series of planned raids on Tuesday in the New Territories.

The alleged group set up an online casino, which included live games such as roulette, blackjack, poker, and baccarat – all of which are very popular in the Asian region. To avoid detection, the website’s servers were constantly moved around Europe and North America.

With the online casino operational, the syndicate then recruited local agents from within the gambling industry to find players for the site. Before being able to play, the gamblers needed to buy ‘game points’ from the agent that could be used on the website to play real money games. One police source claimed that agents managed to buy four game points for HK$1 and these were sold to their customers for as much as HK$8.

The police operation, code named Deepskill, revealed that the syndicate had managed to attract thousands of Hong Kong gamblers since the start of its operation. The money that the agents received from players was then laundered through a series of accounts to make it more difficult to trace.

As a part of the investigation, the police froze bank accounts containing HK$4.5 million that were controlled by members of the syndicate. Other items, including bank cards, mobile phones, and laptops, were also seized in the raid and taken as evidence.

Hong Kong is known for its strict anti-gambling laws despite many Hongkongers in favour of the activity. As things stand, all online gambling activities are overseen by the Hong Kong Jockey Club, although it really only deals with horse racing and football. The restrictions on legal gambling have forced the activity underground. This bust is the latest in a long list that stretches back as far as one can remember. If charged, and found guilty, the outlook doesn’t seem too good for those involved.

In Hong Kong, persons who engage in illegal gambling activities can face up to seven years in jail and a fine of HK$5 million. Furthermore, the penalty for money laundering, which is a more serious offence, is up to 14 years in prison and a HK$5 million fine.

This story is a reminder that players should always strive to bet in legal jurisdictions with licensed operators like Mr Green or Dublinbet. Legal gaming should always be your number one priority.