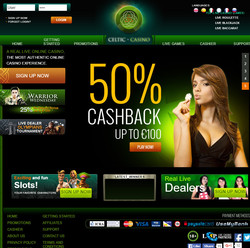 Great news for players of live dealer roulette, baccarat and blackjack : Celtic Casino is prolonging its live tournaments by four extra months and has reviewed the way that prizes are awarded because now it’s not just the first 15 players who have built up the most points who will win a prize but the first 25. The value of the prizes won’t change and will remain 6100 euros for each tournament. We’ll tell you everything about the “Live Dealer Cup Tournament” as the series of 4 tournaments is called!

The first “Live Dealer Cup Tournament” tournament which is replacing the “Game of Thrones Tournament” starts on the first of June and players can accumulate points to win one of the 25 prizes on offer from Celtic Casino. It’s the same in September 2016 when points can be built up at all the live roulette, baccarat and blackjack tables. In July only the online blackjack tables will be involved and in August only the online roulette tables. A great programme from Celtic Casino which, following the success of its tournaments has added others  much to the delight of fans of live dealer table games.

25 winners and prizes with no withdrawal conditions

Celtic Casino has decided to reward not only the first 15 but the first 25 players to accumulate the most points. Given that each euro wagered is worth a point, the points can build up very rapidly. Here are the details of the division of the prize pot among the 25 winners:

It needs to be said that the prizes in these tournaments can be withdrawn at any point and the prizes aren’t in the form of bonuses or other forms. Players can withdraw the money credited to their accounts whenever they wish. Celtic Casino is consolidating its place as a leading tournament organiser along with its fellow casino Fairway Casino and players with a Fairway Casino account can access these tournaments. Just like all the tournaments organised up to now, the “Live Dealer Cup Tournament” series of four tournaments should be a great success.

Play on Celtic Casino and take part in its many roulette, baccarat and blackjack tournaments run on Visionary Igaming software, a leader in live gaming.