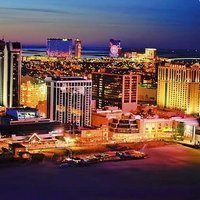 The American gambling industry has Las Vegas to the west and Atlantic City to the east. Situated on the New Jersey coast, Atlantic City is the natural second choice for the millions of players who visit the city and its superb casinos every year. So even though it has hit hard times recently, Atlantic City still holds a special place in the American and global gaming industries.

The founding and development of Atlantic City

Atlantic City was founded in 1854 between the marshes and the Atlantic Ocean and has always benefited from its geographical location which has made it popular with property developers and those who appreciate life by the sea. For a while the city was considered a leading spa destination. Atlantic City also benefited from its proximity to Philadelphia and its potential markets. However, early on, sand hindered the development of businesses by the Atlantic coast. To counteract this a wooden promenade was constructed on part of the beach in 1870 and “Boardman’s Walk” as it was known was extended many times. Now, the Boardwalk is the longest coastal promenade of its type. The city developed around it and the port.

The rise of Atlantic City’s casinos

Similar to Las Vegas, Atlantic city’s casino industry was mostly developed by Mafia leaders. At the start of the 20th century, Enoch L. Johnson, a leading Mafia godfather, arrived in Atlantic city with the intention of making it a tolerant, liberal and entertaining city. Even though prohibition and the ban on games of chance had been in place since 1910, contraband and gambling dens flourished in Atlantic City. So until the second part of the 70s, gambling developed underground. At the same time, Las Vegas, where gambling had been legal since 1931, was way ahead of Atlantic City where it was 1976 before legislation legalising gambling in New Jersey was passed. Two years later, in May 1978, Resorts International, the first ever legal casino in the eastern United States, opened.

In the following years the construction of casinos with their neon lights greatly altered the urban landscape of Atlantic City especially along the Boardwalk and around the Marina. Tourism exploded with visitor numbers increasing from 700 000 in 1978 to more than 33 million annually in 1988. The 1980s also saw the involvement of casino tycoons in Atlantic City’s gambling industry. Donald Trump invested large amounts in organising boxing galas to attract more visitors and at the end of the 1980s Steve Wynn, owner of the Mirage and the Bellagio followed in his footsteps.

Atlantic City had a dozen casinos but many casinos closed in 2014. The following are the main ones:

Why Live Casino Games With Random Multipliers Are Popular

Live casino games with random multipliers are all the rage at the moment. The industry’s best and most innovative live dealer providers create dozens of new titles each year. And top online casinos such as Mister Mega add these games to their library to ensure players are treated to

Roll the Dice With Super Sic Bo and MrMega

Super Sic Bo takes an old-school casino dice game and brings it into the modern age. This old favourite is extremely popular in Asia, where the traditional game of Sic Bo has its roots. But with this particular live casino game, Evolution introduces thrilling random multipliers of up to

Get Lucky With Crazy Time at Betiton

Crazy Time from Evolution is a live game show that’s become insanely popular with online casino fans since its release in 2020. The high volatility game offers players the chance to bank 25,000x their wager through a number of thrilling bonus rounds. As ever, Betiton is the place to

In recent years, there has been an explosion of live casino games, and roulette is no exception. In the past, you could only play on a virtual wheel, with limited graphics and animations. But thanks to huge advances in live dealer technology, we can now enjoy a real life

Power Blackjack at MrMega offers an extremely innovative twist on the classic game of 21. Not only is it part of Evolution’s Infinite series, meaning any number of players can take part. But all of the 9s and 10s are removed from the deck, plus you have the chance