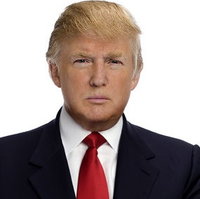 Looked upon as a rich eccentric by some and as an accomplished businessman by others, Donald Trump is a much talked about businessman. “The Donald”, a property magnate, is the prototype of an American capitalist who is omni present and who works hard on his image. He learned very young that fame can be lucrative.

In contrast to Sheldon Adelson and Kirk Kerkorian, Donald Trump couldn’t really be called a self-made-man. Donald Trump was born into a fairly well off family on the 14th of June 1946 in Queens, New York. His father, a highly skilled property investor, brought him and his 4 brothers and sisters up strictly. Since he was thought to be too active he was sent to the New York Military Academy at the age of 13.

After this he attended the Fordham University and then the University of Pennsylvania, where he graduated in economics. He joined his father’s property company and over the following years he was mentored by his father in all areas of the property business and this made him into a formidable businessman. So for the first few years that he was in business his father was involved in his success and his growing fame. Then in 1971 he left to live in Manhattan where he mixed in high society and continued his social and business rise to fame. His indiscretions and over the top television appearances picked up by the American media also added to his notoriety.

The beginnings and development of the Trump empire

Following in his father’s footsteps, Trump decided to build his empire in property. He founded the Trump Organisation to construct large luxurious buildings most of which were built in the state of New York and were named after him such as the first skyscraper he built in New York in 1983 : Trump Tower. The same is true of Trump World Tower, the largest inhabited building in the world also built in New York. He also constructed Trump Palace Condominium and the Trump SoHo hotel in New York and in 2009 the Trump Tower in Chicago. Alongside his main business, like many wealthy men, Donald Trump enjoys casino games so in Las Vegas he constructed the Trump Las Vegas and the famous Trump Taj Mahal, a real gambling paradise in Atlantic City. With the construction of the Trump Taj Mahal in 1990 he was able to broaden his business base and greatly increase his revenue. However his plans were badly affected by the 1990 property crash but there was more bad luck to come in 1995 when the Atlantic City casino suffered huge losses. Donald Trump wasn’t to be beaten and he rose above this major loss thanks to his diverse business interests and to a stroke of genius.

Investment in his celebrity status

Learning from his misfortunes, Trump decided to diversify and so building on his fame and solid reputation, he made his name the mainstay of his business. His ingenious idea meant that he earned tens of millions of extra dollars annually. In 2004, Trump launched his own reality TV show which was co-produced by Trump Productions and aired on NBC earning him even more. To thank him for his contribution to the cinema industry he was given a star on Sunset Boulevard.

In 1996 Trump planned to enter politics. He put himself forward as the Republican candidate for the American Presidential election but he wasn’t successful partly due to the fact that his campaign was judged to be too liberal which is logical since he is above all a businessman. He left the party in 1999 but declared his intention to run again in the primaries in 2011. However he pulled out at the last minute and abandoned his ambition to become President of the United States.
Since 2005, Trump has been the spokesman for ACN Inc, a network marketing company operating mainly in Canada and the United States which uses his image to symbolise the American success story.