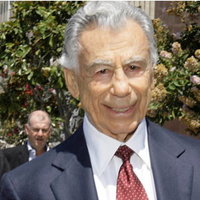 Having started out with nothing, Kirk Kerkorian became one of the world’s richest men. Nick named “Captain Kirk” by the Americans, the casino, petrol and automobile magnate is the perfect example of a self-made man. Kerkorian managed to make the transition from the streets of Fresno to the luxurious casinos of Las Vegas and Macau.

Kirk Kerkorian was born in 1917 in Fresno, California into a modest Armenian immigrant family. Life was hard for the young boy, who showed very early on his desire to succeed. He had to leave school early and became a window cleaner at the age of 13. He never went on to any further studies. He became a boxer, his aggression and his right hook earned him the nickname “Rifle Right Kerkorian”. Even though he had a promising career as a boxer ( 29 wins and 4 defeats) he hung up his boxing gloves in favour of gambling. He was particularly attracted to cash games and became a professional poker player. However, in 1940, the Second World War altered his plans again. On a friend’s advice he joined the Royal Air Force as a fighter pilot. His bravery and fighting spirit brought him into a sector where he later made a fortune: aviation. After the war, he set up an airline company which operated out of Las Vegas from land that he had acquired there. Initially he only invested 60 000 dollars in the business but it grew so much that in 1968 he sold it to Trans International Airlines for 104 million dollars. This formed the basis of his fortune and he built this up by managing to hold onto his lands in Las Vegas where he built hotels and casinos, the cornerstone of his empire.

In 1973, Kerkorian invested in the film industry by buying the MGM Studios (Metro-Goldwyn-Mayer) which were failing at the time. However, the film industry wasn’t really for him, his main interest was cash games so in the same year he built the MGM Grand Casino. For several years this was the largest hotel in the world and its casino was the most famous in Las Vegas. In 1980, Kerkorian bought the Las Vegas and the Reno which he sold six years later to Bally Manufacturing making a profit of several hundred million dollars. In 1988, he bought the Las Vegas Sands from Howard Hughes and he sold it on six months later to Sheldon Adelson making another large profit. He built up his MGM Resorts Group quickly by investing shrewdly. By now a billionaire, Kirk Kerkorian’s fortune is assured by his stock exchange listed MGM group which owns twenty casinos in Vegas, Atlantic City and Macau including the Mirage, the Bellagio and the MGM Grand Macau. The MGM Group now owns more than 50% of all the luxury hotel rooms on the Las Vegas Strip.

To ensure a majority share in MGM Mirage Kerkorian founded the Tracinda Corporation using the names of his daughters Tracy and Linda and with this company he also diversified his investments. He began to buy up large companies that were in financial difficulty and his first target was the American automobile industry. He bought shares in General Motors and in Ford where he is the main shareholder with 9.9% of its shares. He attempted but didn’t succeed in buying shares in Daimler-Chrysler and in setting up a merger between Renault – Nissan and General Motors. Tracinda Corp also has involvement in some leading companies in the oil industry such as Delta Petroleum.

Kirk Kerkorian has also been very involved in the development in the country of his birth. Over the past few years, he has donated more than 170 million dollars to support various development projects in Armenia. In 2004, he was declared a national hero in Armenia.

Now at almost a 100 years old, Kerkorian shows no signs of leaving the business world. Maybe he’ll make one last major investment before bowing out? Who knows!