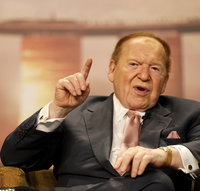 Listed as the 8th richest person in the world by Forbes in 2013, Sheldon Adelson is an American billionaire well known in the casino industry. The current chairman of Las Vegas Sands, a property developer who made his fortune from nothing, is the perfect image of the American dream: a self made man.

Sheldon Gary Adelson, born the 1st of August 1933 in a Boston suburb, is the son of a Lithuanian taxi driver. He grew up in very modest surroundings, living in just one room with his whole family. From a very early age Sheldon was ambitious. At the age of 12 he borrowed 200 dollars from one of his uncles so he could sell newspapers. This was successful as he bought the rights to sell on one of Boston’s main streets. However, he soon realised that he wouldn’t make his fortune this way.

From newspapers to casinos

Sheldon Adelson tried many things after leaving the Boston streets. He studied to become a legal journalist, then gave that up to join the defence forces for three years. He never lost his entrepreneurial spirit. He knew that the only way he could make a fortune and build an empire based on all of his many interests was to become an entrepreneur. He tried many different small businesses: selling hygiene items for hotels, property investments, tourism, investment in a sugar factory, brokerage, investment advisor… he tried them all. He was a millionaire at the age of 30 but lost it all in various catastrophic investments. However, being an optimist he carried on and in 1978 he had the excellent idea of launching the first computer exhibition COMDEX. It was a wonderful idea and even though he knew nothing about the sector he created an integral part of it. Sixteen years later COMDEX was sold for 800 million dollars and Sheldon Adelson’s fortune was made. But some time before this, using finance from COMDEX he realised his greatest dream: to own a casino. He acquired the Las Vegas Sands which had had its hey day in the 1960s and this was the beginning of a casino empire.

The building of an empire

By buying Sands with some of his childhood friends, Adelson took a great risk because even if the casino had once been famous thanks to the stars who visited it, it was a shadow of its former self when it was bought for 128 million dollars in 1989. Adelson had the idea of building a large conference centre onto the hotel to attract a new clientele. Success followed quickly and the Sands came back to life. Even though he was the envy of his competitors, this wasn’t enough for Sheldon Adelson. So in 1996 he decided to build a vast complex to replace the Sands and to attract a larger clientele. The Sands was demolished and three years later it was replaced by the Venetian Casino with architecture based on the famous Italian lagoon city. Even though the complex was huge, it was extended twice to become the largest in the world in 2008 with 7000 suites, many shops, restaurants and its immense casino. A city within a building offering visitors all they required.

Following his business instincts Adelson then invested in Asia. He was one of the leading developers involved in the transformation of Macau, where in 2004 he built the Macau Sands as a “test” before constructing an even bigger replica of the Las Vegas Venetian. After some years of construction and an estimated investment of 2.4 billion dollars, the Venetian Macau became the world’s largest casino at 920 000 m2 with a 3000 suite hotel. An incredible project which was followed by another even more amazing one: the Singapore Marina Bay Sands constructed in 2010. The Las Vegas Sands group , majority owned by Adelson, also owns the Palazzo built near the Venetian in 2007.

After a few troubled years marked by the uncertainty of rebounding after the financial crisis and  difficulties in the Macau casinos with Peking's anti-corruption policies, the Las Vegas Sands group is serene once again. Based on the excellent results of the past year, the largest casino group in the world

Looking at the figures for 2016, it is easy to think that the decline in revenue for Las Vegas Sands is due to the Parisian Macao. This isn’t the case as the Macau market rebounded towards the end of the year. It is not possible to get a clear picture

Sheldon Adelson owner of Las Vegas Sands and several land based casinos in the United States, Singapore and Macau is continuing his campaign to have online gambling declared illegal in the United States. He has made the headlines regularly with his highly financed efforts to reinstate the 1961 Wire Act

For many Sheldon Adelson’s name is forever linked to his Las Vegas Sands company and now he is to take over at the top of the Las Vegas Sands Asian based subsidiary Sands China. The move comes as the current president and Chief Executive Officer Edward Tracy is due to

Sheldon Adelson has vowed to prevent the growth of internet gambling in the United States and is pouring money into lobbying Congress to support his opposition to online casinos. Adelson, the chairman and Chief Executive Officer of the Las Vegas Sands Corp and one of the world’s richest men has