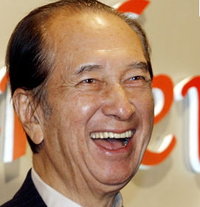 Stanley Ho’s name is irrevocably linked to the history of Macau. Ho, the richest man in this Chinese Special Administrative Region has been nick named the “King of Gambling” and remains the forerunner of casino gambling in Macau. Even though his monopoly has now been affected by the recent opening up of this market, the new gaming capital will always be in debt to this Chinese entrepreneur who arrived from Hong Kong at the beginning of the 20th century.

From Hong Kong to Macau

Stanley Hung-sun was born in Hong Kong into one of the largest Chinese dynasties on the 25th of November 1921. At that time his family was one of the richest and most powerful on the island but in 1934 the family was ruined in a stock market crash. So at the age of 13, Ho vowed to rebuild the empire that crumbled before his eyes causing the suicide of two of his brothers. He started his studies in japanese, portuguese and english but these were disrupted in 1942 when the Japanese invasion forced him to flee from Hong Kong to Macau. So at the age of 22 he arrived in the city full of dreams. He started his working life with a Japanese import- export company and his wonderful business sense meant that he quickly became a partner. In 1943 he founded a company selling kerosene and then became involved in the booming property market rebuilding Hong Kong after the war. Several sources implicate Ho in the black market between China and Macau during the Second World War. In any case, at the end of the 1950s Stanley Ho possessed a fortune that would allow him to realise his wildest dreams.

At the beginning of the 1960s Stanley Ho continued building his empire by diversifying his interests. In 1961 he set up Shun Tak Holdings and acquired an impressive flotilla of ferries plying between Hong Kong and Macau. However, it was in 1962 that Stanley Ho carried out the major coup that guaranteed his fortune when his father in law used his influence to get him the monopoly over Macau’s gaming industry. For an investment of just 410 000 dollars, he took over the monopoly from the Fu family and so over a few years he fulfilled his dreams. His main company, the Sociedad de Turismo e Diversoes de Macau (STDM) developed the city’s gaming industry by constructing ultramodern casinos. Fairly quickly Ho had built fifteen casinos and greatly increased his assets. By diversifying into other businesses, he quickly became the richest man in Macau and also in the whole of Asia. For 40 years Ho ruled the Macau casino industry by creating an Asian mini-Las Vegas which attracted players from Asia and the rest of the world.

The opening up of the gaming market

Stanley Ho’s monopoly over Macau’s gaming industry ended on the 31st of December 2001. After the Portuguese ceded Macau to China in 1999, China decided to open the Macau market to foreign investors. Many people thought that by doing this, the Chinese government wanted to reduce Ho’s hold over the economy in the Macau Autonomous Region. Others thought that it was just the outcome of intensive lobbying by certain major casino operators who wanted to take over the Asian gaming market. Either way, from the beginning of 2002, Ho faced fierce competition from Las Vegas magnates such as Sheldon Adelson (Chairman of the Las Vegas Sands Group, owner of the Venetian) and Steve Wynn (Chairman of Wynn Resorts Limited which owns the Mirage and the Bellagio among others). Initially, Stanley Ho benefited from the opening up of the market as a new wave of high rollers flowed into Macau but the following years were made more difficult by competition from gigantic casinos such as the Wynn Macau (2006) and the Venetian Macau (2007). Not to be outdone, Stanley built the Grand Lisboa Macau ( finished in 2008), a 136 000 square metre complex that is 261 metres high and at the moment it’s the tallest building in Macau. So even with all this competition, Ho is holding his own and still has the highest number of casinos in the city at 29 offering more than 4500 gaming tables.

At over 90 years of age, Stanley Ho is still very involved in Macau’s gambling industry and some of his children are also involved in the sector. His daughter Pansy Ho owns a half share in the MGM Macau and Lawrence Ho is the present chairman of the Melco Crown Entertainment Group. Companies belonging to the Ho family have ongoing projects in Russia, Vietnam, North Korea and the Philippines.

Stanley Ho gives his daughter a luxurious house for her engagement

Powerful, wealthy men rarely do things like everyone else. Stanley Ho, the casino magnate has just proven this once again on the engagement of his daughter, Sabrina. Celebrated at a level that is to be expected given the social standing of the young couple in question, the event stood out

The South Korean authorities are actively encouraging foreign casino operators to invest in huge integrated casino resorts in the country. These new casino resorts will not be open to local Korean players. There is only one casino in South Korea where Koreans can gamble and it is in a fairly

Until 2001 when Macau’s gambling industry opened up to operators from outside, Stanley Ho’s company held the monopoly over gambling in Macau. Initially his casinos were fairly basic buildings aimed at dedicated gamblers but in recent years and especially since Macau is the only area in China where gambling is