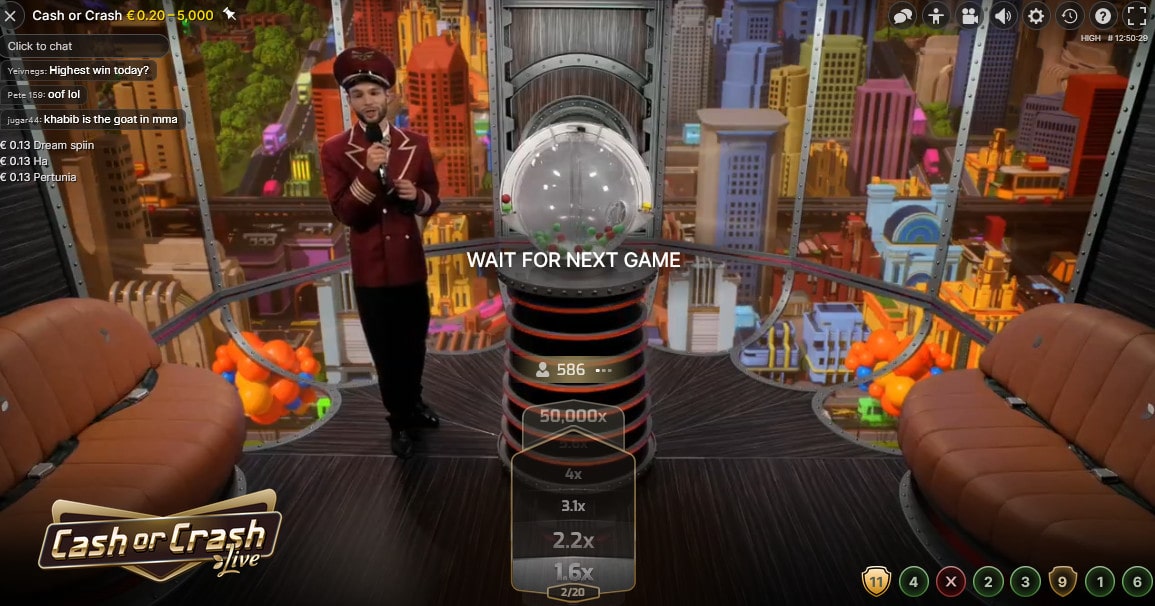 Cash or Crash is a brand new live dealer game show from Evolution. It expands Evolution’s live game show selection even further, solidifying its position as the market leader.

This fun, fast-paced game takes place in a blimp high above a colourful city. Player’s win cash prizes by climbing a payment ladder as balls are drawn from a machine randomly.

So, what is live dealer Cash or Crash like? How much can you win? How does the game work, and is it worth playing? We’ll cover all of this and more in this fair Cash or Crash review.

How to Play Cash or Crash

So, what does a typical game of Cash or Crash look like? What do you need to do, and how does it go? We always play the live dealer games we review for ourselves to give you authentic information. This is what we experienced when we played Cash or Crash.

It’s a very simple game that doesn’t require much thought. The only decision you’ll have to make at each level is whether to walk away, bet half, or cash out and leave the game.

Of course, it helps to consider how many balls of each colour have been drawn and how many are left. In the beginning, there are 19 green, eight red, and one golden balls. Remember that as green balls are drawn, the probability of drawing another one decreases as the total number left in the ball machine drops. At some point, it’s wise to keep at least half of what you’ve wagered.

Are There Any Negatives to This Game?

Each player views the positives and negatives of each game differently. Here are some things that may be perceived as negatives by some players.

This is an excellent new game show by Evolution. As usual, every game element has been carefully considered to deliver an all-in-one entertainment experience.

It probably won’t appeal much to players who enjoy skill games, but if you like some thoughtless thrills and the potential to win big payouts, it will be right up your street. If you enjoy keno, lotto, and bingo games, you’ll probably love it.

Is Cash or Crash rigged?

No, this game is run by Evolution, which means it is approved by the UK Gambling Commission. The UKGC checks and monitors its license holders and their published game payouts. You can be sure this game is fair.

Is Cash or Crash rigged?

It’s 18,000x in standard game mode. If you manage to draw the golden ball it increases to 50,000x. That could be a lot of money if you’re lucky enough to get to the top.

Can Americans play this live game?

Yes, but only in legal and regulated states like New Jersey and Pennsylvania. Evolution has a couple of studios in the USA, and its presence is growing as more states legalize live dealer games.