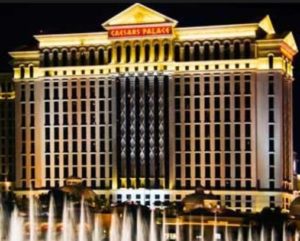 Caesars Palace, the iconic symbol of Las Vegas, is one of the most famous casinos in the world’s gaming capital. Even in the face of stiff competition from the Strip’s recent complexes, it has remained a favourite with casino gamblers since 1966.

In 1962, Las Vegas’ hey day, a visionary entrepreneur, Jay Serno along with two partners (Mallin and Harris) constructed a modern European style casino. Serno wanted to attract a new clientele by offering different types of attractions and services. He wanted to give the hotel-casino an impressive theme and name so he chose the name of the most well known emperor in history: Julius Caesar. However, by leaving out the apostrophe in the word “Caesars”, he changed the meaning from just one “Caesar’s” palace to a palace belonging to many Caesars! Harris based the design of the complex on Ancient Rome. It opened on the 5th of August 1966 and was renovated in 1974 and 1979. From the beginning of the 1980s Caesars Palace was a main destination for casino fans and also for boxing fans. Several major boxing matches were organised with the intention of making the casino even more popular and these attracted crowds and boxing champions.

There is a statue of the ex-world heavyweight champion, Joe Louis in the hotel. The Las Vegas Formula 1 Grand Prix was held in 1981 and 1982 on Caesars Palace’s immense car park. Continuing in this vein of making Caesars Palace the main place for entertainment in Las Vegas, a hockey match with the New York Rangers and the Los Angeles Kings took place on the 27th of September 1991 in one of the complexes car parks that had been turned into an amphitheatre for the event. The following year, after another renovation, the complexes shopping centre, The Forum Shops at Caesars was opened. This was the first real shopping centre in Vegas. In the hotel on the 4th of April 1993, more than 15 000 spectators watched Wrestlemania IX, a famous WWE wrestling tournament. The complex was renovated again in 2001 and 2005. Now, Caesars Palace which is situated between the Mirage and the Bellagio has 3349 rooms spread over its 5 towers : Palace Tower (the main tower, 133 metres high and with 29 floors), Augustus Tower, Forum tower, Roman tower and Centurion Tower. Over the years, Caesars Palace has changed hands many times : Sheraton, Hilton and Caesars Entertainment before belonging to the Harrah’s Entertainment Group since 2005.

Caesars Palace is very much oriented towards family entertainment and offers a great range of attractions for this clientele, including:

The complex also includes a wedding chapel and a gym with a view over the Strip.

With almost 12 000m2, Caesars Palace casino is one of the largest in the world. Slot machine fans can enjoy 1500 slots with bets from 1 cent up to $500. Table games fans (Blackjack, Craps, Roulette, Baccarat, Three Card Poker, Pai Gow poker, Pai Gow Tiles) are well catered to with numerous gaming tables in two huge rooms. Caesars Palace’s Poker Room with 50 tables is open 24/24 and along with daily tournaments some of the world’s most famous tournaments such as the WSOP Warm Up and the NBC Heads-Up Poker Championship take place there.

Caesars Palace is also well known for the extremely successful major concerts it has hosted for several years. Among these was Celine Dion’s show, “A New Day” which ran from 2003 to 2007. Now after a break of a few years, the Canadian singer has been performing in a new show since the 15th of March 2011.

One of the most iconic casinos in Las Vegas, Caesars Palace, is set to get a multi-million dollar makeover. The already opulent and stylish casino will see new funds worth millions injected to modernize several

Celine Dion in Caesars Palace Las Vegas – it’s all over!

After more than 15 years appearing almost every night on stage in the Colosseum in Caesars Palace, Celine Dion has announced that she will soon end her residency in Las Vegas. On the 8th of

Celine Dion fans who were hoping to see her on stage are greatly disappointed. The singer from Quebec is suffering from a hearing problem (Patulous Eustchian Tube) and so can't sing correctly. So she has