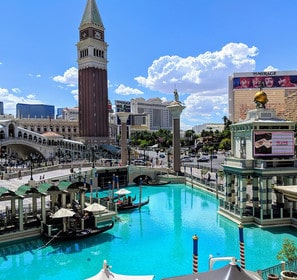 With more than 7000 luxury rooms, the Venetian is the world’s largest hotel-casino. Themed on the city of Venice, this incredibly luxurious 5 star hotel offers all the services and activities needed to give the impression of being in the famous Italian city while on the heart of the Strip.

History of The Venetian Las Vegas

In 1989 Sheldon Adelson acquired his first hotel-casino, the Sands. The well known property developer planned to attract a new clientele to the once mythical 1960s hotel that had seen better days. Initially he built conference centres in the vicinity of the hotel but then decided to demolish the Sands and to replace it with one of the world’s largest hotel-casinos. So on the 26th of November 1996 the Sands was dynamited and the over 3 year long construction of the Venetian hotel-casino began on the 14th of April 1997. At 1.5 billion dollars it was one of the most expensive hotels at the time.

Sheldon Adelson’s Las Vegas Sands group launched the Venetian Hotel Casino Resort with its 3036 suites which are a mark of the hotel’s luxury, it only has suites of over 60m2. The opening night was spectacular, white doves were released and gondoliers on the casino’s artificial lake serenaded the guests who included the Italian actress Sophia Loren invited by Sheldon Adelson to launch the complex’ first motorised gondola with him.

The complex which is situated beside the Casino Royale and opposite the Treasure Island had its first extension of 1013 suites added in 2003 bringing the total to 4049 suites. Then in 2008, Sheldon Adelson added The Palazzo, an extension of 4000 luxury rooms so with 4059 rooms and 4049 suites spread over about 35 600 m2, the new complex became the world’s largest hotel.

Other aspects of the Venetian Casino Las Vegas

Built in the style of the Strip’s gigantic hotel casinos, in addition to its 5 star rooms, the Venetian offers the following attractions:

The casino in the Venetian Casino Las Vegas

The Venetian’s casino is as grandiose as the rest of the complex. It offers players the following:

Anecdotes about the Venetian

Like many casinos on the Strip, The Venetian has featured in films. In the film “Conair” ( released in 1997) starring Nicolas Cage, the plane makes an emergency landing on the site where the Sands had just been demolished. In 2005, one of the scenes from the film “Miss FBI” with Sandra Bullock was filmed in the Venetian casino.