All you need to know about the Wynn Casino Las Vegas 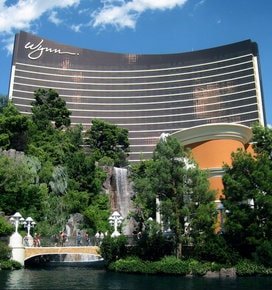 Named after the famous american casino magnate Steve Wynn, the Wynn Casino Las Vegas is one of the most recent and also one of the largest casinos on the Strip. It has nature and luxury as its themes and is built to the same high standards as the billionaire’s other casinos including the Mirage and the Bellagio.

When Steve Wynn merged his Mirage Resorts group ( which managed his Mirage and Bellagio casinos) with billionaire Kirk Kerkorian’s MGM group, he created the Wynn Resorts group and bought the Desert Inn, one of the Strip’s most famous casinos, for 270 million dollars.
Wynn planned to demolish the casino which dated from the 1950s and which had changed hands several times and to construct his greatest hotel- casino.
Demolition of the Desert Inn began on the 23 of October 2001 but to carry out his major project, Wynn needed extra space. After some long court battles, he managed over several months to acquire several private houses on Paradise Avenue. So with the land from the old Desert Inn, the hotel’s golf club and the new land he had a site of 870 000m2. Work began in 2002 on the new complex that was initially called Dream but was then called the Wynn Las Vegas.
After about 3 year’s work and an investment of 2.7 billion dollars Steve Wynn launched the casino on the 26th of April 2005, his wife’s birthday. The casino has 2716 five star rooms and suites over 45 floors. At 187 metres tall, it is the second highest building in Vegas after the Las Vegas Stratosphere. In 2008, a luxury 2000 suite extension the Encore Suites was added and in 2009 the complex became the Wynn Las Vegas & Encore.

The Wynn Las Vegas’ other attractions and services

Details of the Wynn Casino

The Wynn Casino covers 10 200 m2. The main room is decorated with marble, gilding and flower displays.
The imposing casino offers:

How to find the Wynn Las Vegas in Google Maps

Through its subsidiary Wynn Las Vegas, the Wynn Resorts group has taken a case against Paul Se Hui Oei, a Canadian business man said to have run up debts of $76 000 over several months.

Casinos in Japan: Wynn Resorts gives up Osaka in favor of Tokyo

Since Japan decided to open some gaming houses, the big casinos groups have eyes only for it. Economic stakes are outstanding and cost billions of dollars each year. According to experts, the few casinos in

There is no shortage of candidates wanting to open a casino in Japan. According to specialists, the revenue in casinos that will open in Japan will be higher than that in casinos in Las Vegas