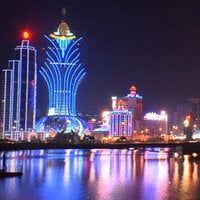 Known as the « Las Vegas of the East », Macau is the new gaming capital and has often been considered a full sized copy of the famous American city. This Chinese administrative region with its special status has been completely transformed over a few years to become a new gaming destination for millionaires and other big spenders from around the globe.

History of Macau and its transformation

Macau was returned to China in 1999 having been occupied by the Portuguese during the 17th century. Situated on a peninsula just an hour from Hong Kong, Macau built on this proximity to develop its tourism industry. Visitors were quickly attracted by the contrast between its ultra modern buildings and its architectural and historic heritage including some sites on UNESCO’s world heritage list. However the real transformation of Macau began in 2002 when the Macau authorities decided to open up the gambling market to competition even though up until then, Stanley Ho’s large Hong Kong based company had held the gaming monopoly in Macau. The floodgates were open and immense casinos started to spring up like mushrooms completely changing the outlook and atmosphere in the city.

Several Las Vegas magnates were attracted by this very promising market and seriously challenged Stanley Ho’s strong position. Steve Wynn, owner of the famous Bellagio and Mirage casinos and Sheldon Adelson, the powerful chairman of the Las Vegas Sands group both set up there. Macau, with its fairly stable economy became the new leading destination for games of chance. Major players flooded in from all over the world and within only three years Macau’s gaming industry was bringing in more revenue than Las Vegas. In 2006 it had revenue of 7.2 billion dollars compared to 6.6 billion for Las Vegas. So when one takes into account the fact that income has continued to increase, one can really see the extent of this revolution.

Thanks to its new status Macau has really developed its tourism industry over the past few years as thousands of tourists passing through Hong Kong arrive in its casinos. Once they arrive, they become caught up in the exciting atmosphere in the city’s casinos found in most of the large hotels. Gaming is everywhere in this paradise where all of one’s dreams could come true. There is a full range of games available: blackjack, baccarat, poker, roulette and slot machines. There are almost 10 000 gaming machines and 4 000 tables spread around the city. Asia’s largest poker tournaments take place in Macau every year including the Asian Poker Tour, the World Series of Poker (WSOP) and the EPT.

Macau has some of the largest casinos in the world and among these the following really stand out:

Macau’s Casinos hit by the Coronavirus

For some days now, China has made headlines all over the world due to a health scare. At the moment, there is a worrying Coronavirus epidemic raging around the city of Wuhan, to the west of Shanghai. This epidemic is having quite an impact on the cash gaming industry in Macau.

Dealers in Macau’s Casinos concerned for their health

In an effort to reassure those involved, a trade union representative has asked the government and casino operators to prove that the waves emitted by smart tables introduced into gaming tables pose no threat to dealers in Macau's casinos. For several months, the dealers had made known their concerns about the

The dealer robots: soon a reality in Macau casinos

Thanks to a new technology developed by the company LT Game in Hong Kong, casinos in Macau will soon experience a real revolution. The integration of dealer robots in these casinos will overcome the lack of professional dealers in the Chinese region. According to a recent article published by the

Macau continues its fight against smoking in casinos

Since last year, Macau has shown how determined it is to ban smoking in its casinos. In a report published on the 8th of November, the Macau Health Bureau / MHB  has made public what is going on in this area by the Bureau of inspection and coordination of games

Games revenue in Macau: September, the worst month of the year

Things do not work out for the number 1 Asian destination of casino games. After a poor first semester, analysts' recovery forecasts are struggling to materialize. Undergoing the combined effects of several factors, Macau recorded, for the month of September, the worst results of the current year. This might arise