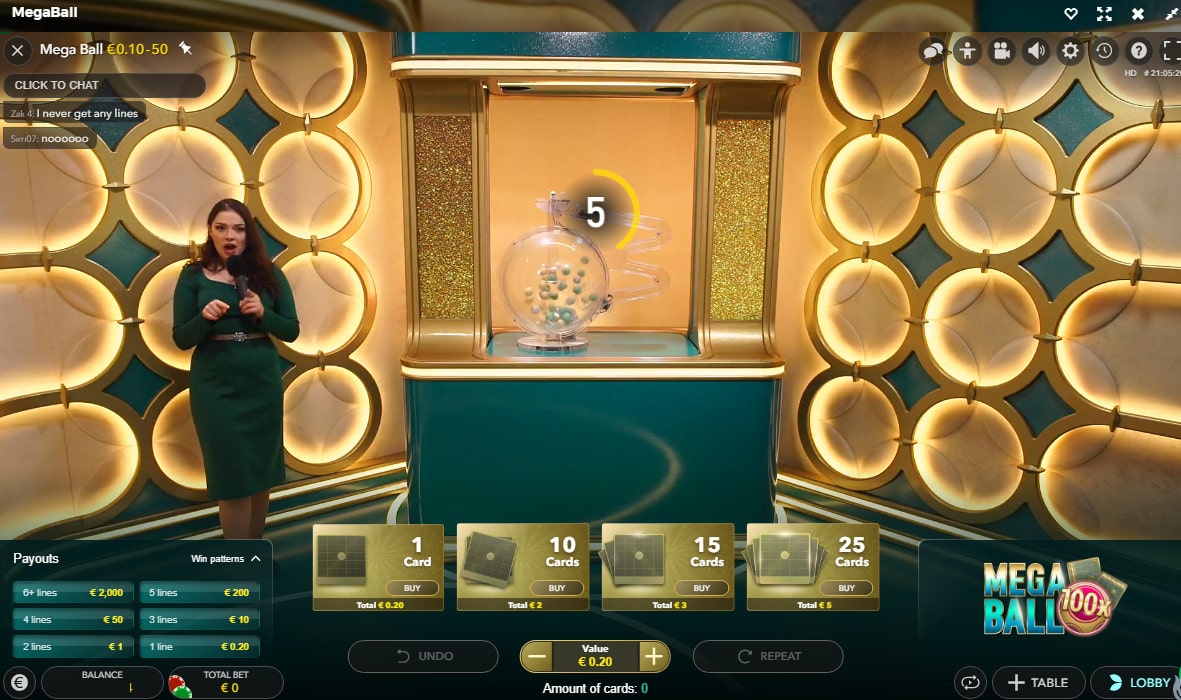 This game brings elements of keno, lottery, and bingo together into a fast-paced and potentially highly rewarding live casino game.

In this Mega Ball review, we’ll tell you how to play Mega Ball, what you could potentially win, how the game works, its pros and cons, and a lot more, too.

Are There Any Negatives to Mega Ball?

No live dealer game is perfect for every single player. While some players might not view these as negatives, they could potentially be for others.

If you’re a fan of lotto-style games like keno, there’s a high probability that you’ll love this game. We’ve been waiting for a live dealer lotto game for quite some time, and finally, Evolution Gaming has delivered it.

You’ll likely have to play it a few times to fully understand all of the game elements, but this looks set to be another Evolution Gaming classic. We enjoyed it, and we think you will as well.

No. Evolution Gaming is a totally trustworthy game provider. They have won dozens of industry awards and are a legitimate, safe game provider.

There are some New Jersey casinos which offer Evolution live games, and we’re aware that the company has plans to expand in the USA. However, players in most states won’t be able to play Mega Ball online yet.

What is Mega Ball?

Mega Ball is the first live dealer lotto game. If you enjoy keno and lottery games, this will be right up your street. As usual, Evolution was first to the punch with this first-of-its-kind live game. You’ll play in a fast-paced lottery draw in a stylish green and gold studio.

Why is Mega Ball different from other live games?

When it was released, this was the only live lottery game online. There are still very few games like it. Most of the other live games online are variants of classic casino table and card games. This is a real keno draw with a game host, ball machine, and interactive digital keno cards.

Yes. It is regularly tested by the gaming authorities that license Evolution. That includes the UKGC, MGA, and some other authorities. You can trust this game.

Why is it better to play Mega Ball than RNG Tables?

RNG keno and lotto games can be fun, but they get a little lonely. Instead of selecting numbers on a digital screen and playing against a computer algorithm, why not purchase cards and play with a friendly and entertaining game host?

How much does it cost to play Mega Ball live?

What is the best online casino to play Mega Ball?

We recommend playing this game at any of the following three live casinos:

You can read full reviews of these live gaming sites here. All of them offer many different Evolution live games.

Is it possible to play Mega Ball for free?

No. You can enter the studio and watch the game at no cost if you wish. However, if you want a chance to win real money, you’ll need to place a wager. Since bets start from just £0.10 and most casinos have minimum deposits of £10-£20, it really won’t cost that much to play.

As of July 2020, you can officially play Mega Ball, the exciting lottery-based game from Evolution Gaming, at DublinBet. This keno/lotto-type game was released earlier in 2020 and was the first of its kind as

Earlier this year, Evolution Gaming announced the release of multiple new live games due to come online throughout 2020. One of these was a bingo-style numbers game called Mega Ball. Today, April 23rd, DublinBet launched