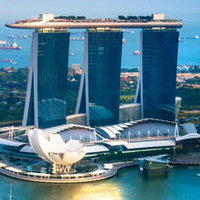 It’s difficult to find the exact words to describe how immense the Marina Bay Sands actually is. Situated opposite the Bay of Singapore, this casino of over 200 metres high is impressive, immense, extremely luxurious, extraordinary, surprising….a complete homage to excess. Built by Las Vegas Sands it set new standards in a gaming industry where luxury is the norm.

History and Description of the Marina Bay Sands

With The Venetian/ Palazzo in Las Vegas and The Venetian Macau, many thought that Sheldon Adelson had reached the pinacle of his career but that was without knowing the American billionaire’s appetite for “profitable excess”. While Las Vegas Sands was still involved in construction in Las Vegas and Macau, Adelson put in a tender to build the first casino resort on Singapore’s Marina Bay. In competition with the Resorts World Sentosa Group among others, the contract was granted to Las Vegas Sands for a proposal that was judged to be far superior to the others.
Adelson and his company were officially declared the winners on the 27th of May 2006 and construction began at the beginning of 2007 with a provisional budget of 5 billion dollars and a completion date of 2009 but work continued into 2010. On the 27th of April of that year, the most ambitious ever hotel-casino building project opened for a preview. Singapore’s architectural landscape was forever changed with this glass and metal, 200 metre high complex. Its three 55 floor towers contain 2561 luxury rooms and suites and are topped by a large terrace of over a hectare (The Sky Park) which has a huge infinity pool and 360 degree views of Singapore.

The official opening took place over two days on the 23rd of June 2010. International stars such as Kelly Rowland and Diana Ross took part in the ceremony and it also included a World Championship Climbing Competition with 7 teams climbing the complexes glass façade.One of the high points of the ceremony was the opening of the Sky Park in front of a 2000 strong crowd. On the 17th of February 2011 there was a third grand opening when a museum in the form of a lotus was added to the complex. At that time the Marina Bay Sands Singapore was evaluated to have cost an investment of 5.7 billion dollars but Sheldon Adelson claimed that it cost 8 billion due to extra costs during construction mainly for labour and building material costs. What is clear though is that to date, the Marina Bay Sands is the most expensive casino resort built.

The Marina Bay Sands with its three 55 floor towers and 2561 extremely luxurious rooms and suites offers a wide range of attractions and services:

Situated in front of the complexes towers, The Marina Bay Sands Casino is without doubt the most prestigious in Singapore. Players can find all the most popular casino games as well as a good variety of new games. Over its three floors, it offers almost 2500 slot machines and about 100 gaming tables with 200 reserved for major gamblers. The only negative is that The Marina Bay Sands doesn’t have a Poker Room but that doesn’t affect the prestigious reputation of the casino which attracts high rollers in Singapore.