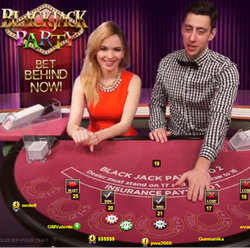 Once again we have an entertainment innovation from Evolution Gaming software and this time it doesn’t involve its immersive roulette but rather blackjack. Evolution Gaming has launched a blackjack table that is like no other, a table hosted by not just one dealer but by two people, to be more precise, a dealer and a hostess. Blackjack Party is a new innovative gaming concept which aims to have players play in a happy, entertaining atmosphere that is far from the “strict” tables found in live casinos. Do you want to know all about Evolution Gaming’s Blackjack Party? We’ll explain this amazing concept that we are sure you will find fascinating.

Play a “cool” type of blackjack

As you enter the Blackjack Party gaming area the music sets the scene in the colourful studio. The table is hosted by two people, a man who is the dealer and a woman who acts almost as his assistant. Both people host a blackjack table where players communicate with the dealers via live chat. Around the table there are discussions, story-telling, jokes, commentaries on players’ hands, all types of topics are covered in a professional manner at a table that is perfectly hosted by the dealer. It’s the atmosphere and the gaming setting that differentiates a Blackjack Party table from traditional tables. Working in pairs, the dealers rotate and one doesn’t always come across the same duos. So at times one has very amusing dealers and an unforgettable game and at others things are a bit more serious but there is always a lively atmosphere.

Once again Evolution Gaming astounds with its online blackjack table. It must be said that the gaming atmosphere is much better than at ordinary blackjack tables because there is constant chat with music in the background and one very quickly adapts to the gaming setting. The table is so popular with players that it’s often full. That being said, the hosts are amusing, the game takes place in a great atmosphere and one becomes so used to it that other blackjack tables may seem a little dull.