Monopoly Live: A 3D Wheel of Fortune with a live host 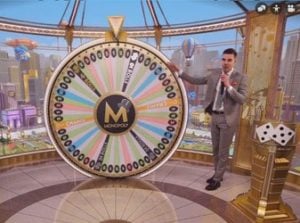 The Monopoly Live game is a wheel of fortune adapted for the famous Hasbro board game. In February 2019, Evolution Gaming launched an innovative game, a mixture of a real game with a live host and a random number generator game. So the Monopoly Live Wheel of Fortune incorporates 3D animations from a studio. The result is amazing. The 3D graphics of Mr Monopoly with his black hat, his white moustache and his stick walking in a real studio are breathtaking.

The game is hosted by a person with a real wheel placed in the middle of a studio in a setting worthy of one of the major production studios. Evolution Gaming has carried off a major coup by signing a partnership with Hasbro to offer a high class Wheel of Fortune with the chance of winning up to €500 000. Considering the popularity of the Dream Catcher Wheel of Fortune, Evolution Gaming has done much better with Monopoly Live, which is guaranteed great success!

Live Dealers Casino has tested this game for you and this is a review of monopoly Live.

How the Monopoly Live Wheel of fortune works

Evolution Gaming’s game Monopoly Live comes from a studio. The New York based decor is sumptuous. There is a wheel in the middle of the studio and the game has a host. As its name implies, Monopoly Live is a live game filmed in real time. Mr. Monopoly, a 3D character sitting on an armchair, appears on the left of the screen. Sometimes you see him reading a newspaper and others drinking a coffee.

The wheel is made up of 54 zones with a number or a price. So there are:

The odds vary greatly depending on the segment of the wheel. This is due to the probability of where the pointer situated over the wheel stops. The number 1 is found most frequently on the wheel. So the odds are lower than for other numbers that appear less often on the wheel. These are the odds at which players might win:

Mr. Monopoly is sent into the Monopoly game and becomes a counter. Two die are combined in a random manner and depending on the amount on the two die, Mr. Monopoly jumps from space to space. With multiplicators, one can win big even up to €500 000. You’ll be just as amazed by the 3D graphics as we are. As regards graphics, Monopoly Live is no doubt the best live game that we have played.

It’s good to see Monopoly Live in action in this video. You can see the wheel spinning and the large prizes. In the video, the Chance number appears once and you can see Mr. Monopoly in action.

Unfortunately while filming the video, the pointer didn’t stop on Rolls 2 or Rolls 4 so we couldn’t show you the 3D animation and the Monopoly gaming setting wth its multiplicators. However, we have put some screen shots of the game.

Monopoly is probably the most recognised board game in existence. There have been TV shows themed upon this iconic game, and countless numbers of video slots, too. However, unquestionably, one of the best spin-offs,

Board games and TV programmes popular with online players

The range of games on offer in online casinos has diversified over time. In the 2000's, slot machines led the market way ahead of table and card games. It must be said that one-armed bandits

Monopoly Live nominated the best game of the year 2019

After being granted several awards in the past, Evolution Gaming, the software developer expert in the design of live games, recently stood out again. Monopoly Live was nominated the best game of the year