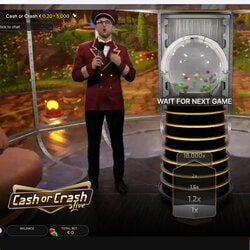 The game is similar to a lotto/keno game with unique features. Instead of cash prizes for matching a certain number of numbers, the coloured balls allow you to proceed up a payment ladder or crash off it.

The higher you climb, the bigger the prizes become.

Live Dealer Cash or Crash – How it Works

Evolution is famous for releasing new and innovative games that its rivals haven’t thought of yet.

Cash or Crash is another example of this continuous innovation.

Here’s a brief rundown of how it works:

When each new rung on the ladder is reached, players are given three options: Take the Cash, Take Half the Cash, or Continue. Obviously, the risk of not taking at least half the cash increases as higher positions on the ladder are reached.

The game takes place inside a blimp above a busy city. You might recognize this city from some of Evolution’s other game shows such as Monopoly LIVE. Each time a red ball is drawn, the studio effects make it look as if the blimp has crashed.

Lucky players who make it all the way to the top of the payment ladder will win 18,000x. If a golden ball has been drawn, the top prize increases to a massive 50,000x your total wager. Therefore, Cash or Crash is one of Evolution’s highest-paying games.

Play this exciting new Evolution live game show at any of these casinos today. It’s brand new and live dealers are waiting to host you.