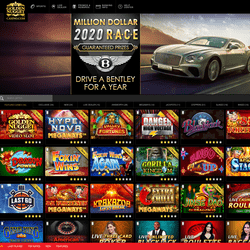 Golden Nugget Online Gaming (GNOG) has reported record revenue for Q2 2020, just ahead of its public listing on the NASDAQ stock exchange. While many land casinos report falling revenue and dire profits amidst lockdowns and restrictions, GNOG and many other online operators are thriving.

The firm reported an 85% increase in gross gaming revenue year-on-year, with $28.2 million taken in the second quarter. Net revenue was $24.8 million, much higher than the $15.3 million reported for the same quarter last year.

Golden Nugget is a respected casino brand in the United States, but we’re specifically referring to its online operators based in New Jersey in this report. The firm recently partnered with live gaming powerhouse Evolution Gaming, showing that it sees what we see: that live dealer gaming is going to grow rapidly across the United States as more states legalize online casino games. This trend is likely to speed up as states search for sources of tax revenue amidst this year’s economic turmoil.

Golden Nugget has land casinos in Las Vegas, Atlantic City, Lake Charles, Biloxi, and Laughlin. Its iGaming operations are based out of Atlantic City, New Jersey.

To state the obvious: lockdowns. Many land casinos have been shut during much of the second quarter, and those that were allowed to open saw significant declines in revenue due to capacity restrictions and players exercising caution by deciding to play online instead.

Since Golden Nugget has partnered with Evolution Gaming, it can offer players in New Jersey the chance to play the best live dealer games online. As we have repeatedly reported on this site, no other live games company offers anything close to what Evolution Gaming does.

Clearly, the partnership is paying off dividends, and when GNOG goes public, that will be true in a literal sense.

One question we have repeatedly asked during our reporting of record revenues for online and live gaming companies in 2020 is: will it last?

As players regain confidence and land casinos reopen, will revenue drop back to previous levels? It seems logical, but GNOG Vice President and general manager Thomas Winter claims that “our online play has remained strong into July and August.” He added that he is confident the firm will exceed targets for the year and is looking forward to expansion into Pennsylvania and Michigan after licensing arrangements are settled.

We’ve said many times that 2020 is the year of Evolution Gaming. Perhaps Golden Nugget Online Gaming is another one to watch as 2021 draws closer?