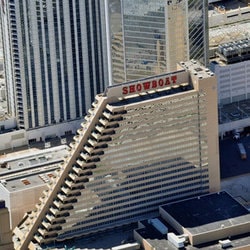 Although they were in deep trouble some years ago, Atlantic City’s land based casinos are in a better situation now. Even so, things aren’t as good for them as for the complexes in Las Vegas or Macau, for example.

In order to attract more players, the management of most of the casinos in the famous New Jersey coastal resort agree that the city needs to become cleaner and safer. They also oppose the return to cash games in the old Showboat casino. At the moment this complex is just a hotel.

However, its owner wishes to offer cash games again in the future, something that the directors of the other casinos definitely don’t want.

The directors of 8 out of Atlantic City’s 9 land based casinos recently met at a round table organised by the city’s Chamber of Commerce. They all insisted that the fight against crime in the areas frequented by tourists needed to be stepped up to create a better image for the seaside resort and so attract more visitors in the future.

A strong signal was given to the city authorities. It is the first time that so many hotel-casino owners made such a public statement. Of course, it’s well known that many complained in private or did allude to these problems pubically. However, such a consensus is unusual in Atlantic City’s cash games industry.

A worrying but salvageable situation

It needs to be said that the city’s current situation is not very desirable. Lots of street lighting doesn’t work anymore so streets are quite dark at night. There are many potholes in the streets. Even worse, there are many drug addicts and prostitutes around the prestigious hotel – casinos.

The situation seems to get worse every year. In brief, for all the professionals who came together one point is clear: the authorities must react rapidly while the situation still isn’t irreversible. A study shows that a solid reduction in crime in the city centre and around the casinos could result in a 20-30% rise in the number of visitors in the short or medium term.

Re-opening of the Showboat casino

Another subject that is preoccupying  the directors of Atlantic city’s land based casinos is the possible re-opening of the Showboat casino. The complex had to close in 2014 and then it re-opened as just a hotel. However, the management now wants to relaunch the casino.

The owners of the city’s other casinos believe that the market in the North East of the United States is already saturated. The last thing that Atlantic City’s cash gaming industry needs is another casino. This would eat into the modest growth in the other casinos.

In spite of this, the Showboat’s management has obtained the authorisation of the State of New Jersey to seek a licence for its casino, although no date has been fixed for a hearing.