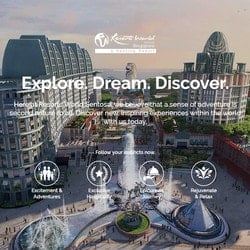 The singapore High Court announced its verdict on the 10th of August 2018, in the case involving Resorts World Sentosa Singapore and a Malaysian businessman. Having built up a debt of 10 million SG$ (about 6.4 million euros) while gambling in the casino, he sought to have part of it written off because he was drunk when he signed the credit agreement.

It can’t be said often enough: gambling can bring the risks of addiction and falling into debt. This is particularly true for high rollers, who are used to spending enormous amounts at tables in the largest casinos. This is a lesson to be learned from this event, which started on the 20th of August 2010. Lee Fook Kheun, a Malaysian construction entrepreneur, went to the VIP area in the Resorts World Sentosa to try his luck at the prestigious casino’s tables. He was well know in the casino because he had planned to open a seafood restaurant in the complex. An experienced player, who benefitted from certain advantages including the possibility of opening a line of credit. He did this and on that night he got 5 million Singapore dollars (about 3.2 million €)  in chips. But he had no luck and two days later, he built up a similar debt with the casino and this brought his loan from the casino to 10 million SG$, all of which went up in smoke.

Drunkeness and non-respect of control regulations?

Following this disaster, Lee Foo Kheun left and never replied to the casino’s multiple attempts to recover the debt. In January 2015, he finally agreed to sign an acknowledgement of the debt and an agreement to repay it fearing that things would worsen. Over the following 6 months, he repaid part of the agreed amounts which was a little over 4 million SG$ out of the amount he owed. On the 21st of August 2015, the day of the last repayment, Mr. Lee still owed the Resorts World Sentosa 5 930 595 SG$ (about 3.8 million Euros).

But rather than pay off the debt, the 67 year old Malaysian decided to seek to have the singapore court simply write off his debt. Mr. Lee claimed that he was completely drunk when he built up the debt with the casino and that he couldn’t have possibly seen the outcome of his actions. He also claimed that he didn’t ask for the credit but that it was very subtley suggested to him by the casino staff. Supported by his two lawyers, he claimed that the casino didn’t obey the control rules imposed on Singapore casinos.

Mr Lee Fook Kheun’s claims didn’t convince the Singapore High Court which ruled that his testimony wasn’t completely coherent. Going back to the beginning of the case, the judge Valerie Thean added that by recognising the debt in 2015, several years after it took place and by not respecting this new agreement, the Malaysian businessman compromised his credibility.

So now he must fully repay the 5.9 million SG$ still due to the Resorts World Sentosa.