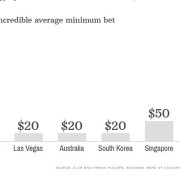 Macau is often compared to Las Vegas especially since in recent years it has taken over Las Vegas’ place as the world’s number one gambling destination. A new comparison is the amount of the average minimum bet in casinos. In Macau this has risen beyond all belief to an average of 270 dollars while in Las Vegas the average minimum bet is 20 dollars. The gambling industry is Macau is seven times larger than that in Las Vegas and the Chinese territory has managed to attract the major casino operators in Las Vegas to build huge luxurious casino resorts there. Sheldon Adelson’s Las Vegas Sands Corp has developed several casinos in Macau including the largest in Macau, the Venetian Casino Resort, the Sands Macau and on the Cotai Strip, the Sands Cotai Central. Another well known Las Vegas group, Steve Wynn’s Wynn Resorts operates the Wynn Resort Casino in Macau.

The constant influx of both VIP and mass market players to Macau casinos has fuelled the massive increase in the amount being wagered on average. Since Macau is the only territory in China where gambling is allowed, it attracts millions of Chinese tourists and gamblers. Some of these gamblers are VIP players or High Rollers who play for very high stakes. However, even non – VIP tables have seen the stakes rise dramatically over the past few years. Now a large number of gaming tables have a minimum bet of $65 and this amount is constantly increasing. Last year just over 15 per cent of Macau’s casino gaming tables had the $65 minimum bet but within a year this number of tables has almost doubled. The average minimum bet of $ 270 at non – VIP gaming tables is expected to increase even more as new integrated casino resorts are due to be launched next year in Macau.

Recent losses but hopes for the future

While there has been a drop in casino income over the past few months in Macau, it is expected that the gambling industry due to get a major boost when new casino resorts open on the Cotai Strip over the next few years. Hotel rooms are to increase by well over 50 per cent to keep pace with the extra tourists from Asia but also other parts of the world who will be attracted to the territory’s major new casino resorts. The Macau authorities have insisted recently that any casinos to be constructed must include a variety of entertainment and leisure attractions so that the economy is not completely dependent on gambling for income.

The recent monthly decreases in revenue from casinos is in part due to the smaller number of Chinese high rollers gambling in Macau because of anti- corruption measures in mainland China and fewer tourist visas being granted to Chinese who wish to visit Macau. However with an average $270 minimum bet in its casinos, things don’t appear to be too bad for Macau’s casinos.